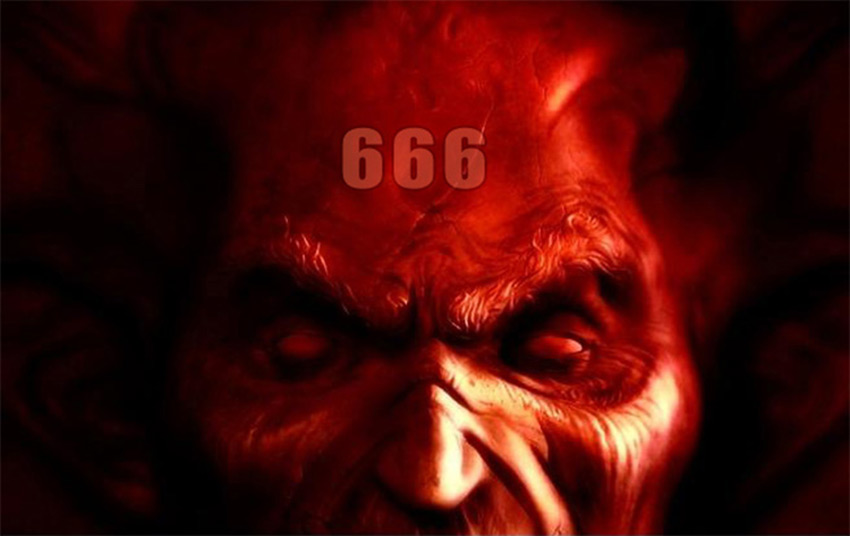 Note: This is a work in progress, and the finished version may be released in one of the books in the Answers From God Series.

Imagine a ruler who arises and destroys the enemies of Israel (including virtually eliminating the threat of Islam to the world) and who rebuilds the temple and restores the daily sacrifice. Would you serve him? Would you accept him as the Messiah of Israel?

The Word of יהוה has a lot to say about the coming, most wicked, vile leader who will rule on the earth for more than 3.5 years prior to the return of Yehoshua to establish His Eternal Kingdom. The Antichrist is so animalistic that the Word of יהוה refers to him as “the beast” (e.g., Revelation 17:17).

The Kingdom of the Antichrist

My articles about Iran and The Final Empires provide some insights concerning the sequence of nations (kingdoms) that lead to the nation out of which the Antichrist will arise. However, the kingdom of the Antichrist is horrible, inhumane and ruled by ten kings before (and at least seven continue on in some capacity after) Antichrist’s rise to power. This kingdom is so animalistic that the Word of יהוה also refers to it as “the beast” (e.g., Revelation 17:16), thus making it somewhat indistinguishable from the Antichrist, himself.

After this I saw in the night visions, and behold a fourth beast, dreadful and terrible, and strong exceedingly; and it had great iron teeth: it devoured and brake in pieces, and stamped the residue with the feet of it: and it was diverse from all the beasts that were before it; and it had ten horns.
Daniel 7:7, KJV

A careful study of the Word of יהוה seems to reveal that the kingdom of the Antichrist is not worldwide in scope. For example, as my article entitled, “Iran,” illustrates, a nation in the region of modern Iran expands its territory westward, northward and southward, unabated (Daniel 8:4), until a nation in the region of modern Greece and Turkey destroys the first nation (Daniel 8:7). The later nation splinters into four other nations (Daniel 8:8) that still exist when Yehoshua returns to establish His Kingdom (e.g., Daniel 7:11-12, KJV), and the Antichrist arises out of one of those four, splinter nations, which he expands southward, eastward and toward Israel (Daniel 8:9). Also, while Daniel 11:41 indicates that he overthrows many countries, it also indicates that the area of modern Jordan (i.e., Edom, Moab and at least part of Ammon) escape out of his hand. He does, however, gain control of Egypt (Daniel 11:42), Libya and Ethiopia (Daniel 11:43).

I beheld then because of the voice of the great words which the horn spake: I beheld even till the beast was slain, and his body destroyed, and given to the burning flame. As concerning the rest of the beasts, they had their dominion taken away: yet their lives were prolonged for a season and time.
Daniel 7:11-12, KJV

That said, it seems that the nation of the Antichrist does gain control over the other three “splinter” nations (Revelation 13:2), and he is given power over all nations (Revelation 13:7). Yet, opposition to him appears to come from Chittim (Daniel 11:30) and, possibly, from the east (perhaps China) and north (perhaps Russia)—Daniel 11:44. Thus, how his web of influence is spun remains to be seen.

In spite of the indicated directions of the Antichrist’s expansion of his nation’s borders (Daniel 8:9)—which could seem to eliminate a nation that is north or west of Israel as a candidate—the Antichrist’s nation is clearly north of Israel (Daniel 11:40). So, the nation of the Antichrist is expected to originate somewhere north of Israel and to expand southward at least into Egypt and Ethiopia. Therefore, in spite of current appearances, this might indicate that he does not gain direct control over the likes of Europe and that the ultimate, direct extend of his Kingdom will be from somewhere north of Israel and include much of the Middle East and Northern Africa.

Perhaps his conquests and expansion could be akin to those of Hitler but originating somewhere about Turkey (or, more likely, Assyria) and expanding southward and eastward from there. My current speculation is that the Antichrist’s kingdom will originate in the area of what was ancient Assyria and that it will expand southward into Iraq, (possibly) Saudi Arabia, (definitely) Egypt, etc.; eastward (probably) into Iran, Afghanistan, etc.; and toward Israel (probably) into Syria, (possibly) Lebanon, etc.

The Empowerment of the Antichrist

I considered the horns, and, behold, there came up among them another little horn, before whom there were three of the first horns plucked up by the roots: and, behold, in this horn were eyes like the eyes of man, and a mouth speaking great things.
Daniel 7:8, KJV

It appears that the last 3.5 years of his reign shall be empowered by Satan, himself, after Satan is cast out of Heaven to earth by Michael, and this period shall be such a time of trouble and fierce persecution of the people of יהוה that the end of it is delimited by the scattering of their power (e.g., Daniel 12:1,7, Revelation 12:6-17, Matthew 24:21-22).

Some Characteristics of the Antichrist

He magnifies himself above all, including all gods, and will have no regard for the concerns of women (Daniel 11:37). Yet, he will honor a god that is different from any of his ancestral gods (Daniel 11:38). At some point, his arm and his right eye shall be struck (possibly in battle), after which his arm and right eye will be useless (Zechariah 11:17).

His ancestors were the ones who destroyed Jerusalem and the temple (Daniel 9:26). He might be Assyrian (e.g., Micah 5:5-6). However, with Yehoshua, it was known where He was to be born (e.g., Micah 5:2), but this knowledge actually caused some to erroneously deny Him as being Ha’Maschiach (e.g., John 7:41-52). Thus, it stands to reason that if one puts too much emphasis upon the Antichrist’s ancestry, he or she may be deceived about the identity of the Antichrist.

The Antichrist Will Be Welcomed By Israeli’s Religious Establishment, At Least Initially

I am come in my Father’s name, and ye receive me not: if another shall come in his own name, him ye will receive.
John 5:43, KJV

And thou, profane wicked prince of Israel, whose day is come, when iniquity shall have an end, thus saith the Lord יהוה; remove the diadem, and take off the crown: this shall not be the same: exalt him that is low, and abase him that is high. I will overturn, overturn, overturn, it: and it shall be no more, until he come whose right it is; and I will give it him.
Ezekiel 21:25-27, KJV

And he who is coming unto him doth according to his will, and there is none standing before him; and he standeth in the desirable land, and [it is] wholly in his hand… and he planteth the tents of his palace between the seas and the holy desirable mountain, and hath come unto his end, and there is no helper to him.
Daniel 11:16,45, YLT

And יהוה said unto me, Take unto thee yet the instruments of a foolish shepherd. For, lo, I will raise up a shepherd in the land, which shall not visit those that be cut off, neither shall seek the young one, nor heal that that is broken, nor feed that that standeth still: but he shall eat the flesh of the fat, and tear their claws in pieces.
Zechariah 11:15-16, KJV

Wherefore hear the word of יהוה, ye scornful men, that rule this people which is in Jerusalem. Because ye have said, We have made a covenant with death, and with hell are we at agreement; when the overflowing scourge shall pass through, it shall not come unto us: for we have made lies our refuge, and under falsehood have we hid ourselves: Therefore thus saith the Lord יהוה, Behold, I lay in Zion for a foundation a stone, a tried stone, a precious corner stone, a sure foundation: he that believeth shall not make haste. Judgment also will I lay to the line, and righteousness to the plummet: and the hail shall sweep away the refuge of lies, and the waters shall overflow the hiding place. And your covenant with death shall be disannulled, and your agreement with hell shall not stand; when the overflowing scourge shall pass through, then ye shall be trodden down by it.
Isaiah 28:14-18, KJV

For I know that after my death ye will utterly corrupt yourselves, and turn aside from the way which I have commanded you; and evil will befall you in the latter days; because ye will do that which is evil in the sight of יהוה, to provoke him to anger through the work of your hands.
Deuteronomy 31:29, ASV

Furthermore, read what Chabad.org has to say about their expectations of Mashiach in relation to what the Bible (including the Tanakh) has to say about the Antichrist. Also, note this interesting bit of Jewish tradition discussed in the book entitled, “The Doctrine of The Messiah in Medieval Jewish Literature,” by Joseph Sarachek, which can be contrasted with the likes of Daniel 11:45-12:1 and Matthew 24:15-22.

Go back to the top.

Psalm 55 is an interesting Psalm in that it both prophesied the betrayal of The Messiah (i.e., Psalm 55:12-14) and how the Antichrist will betray those with whom he has entered into treaties:

He has put forth his hands against those who were at peace with him; he has broken his covenant. The words of his mouth were smoother than butter, but war was in his heart; his words were softer than oil, yet they were drawn swords.
Psalm 55:20-21, NKJV

Furthermore, it is interesting to note the effect of being betrayed from within (Psalm 55:12-14), which is clearly a tactic that The Enemy utilizes everywhere (including within the Ekklesia or Church). That is, one cannot hide from such a betrayal, and such a betrayal is emotionally unbearable. Those in Europe, Australia, New Zealand, the USA, etc. are starting to grasp the inescapable, unbearable effects of such a betrayal. What will happen when the Body of Believers realize that they have been betrayed, more or less en masse, by their “leaders” (2 Thessalonians 2:3, perhaps)?